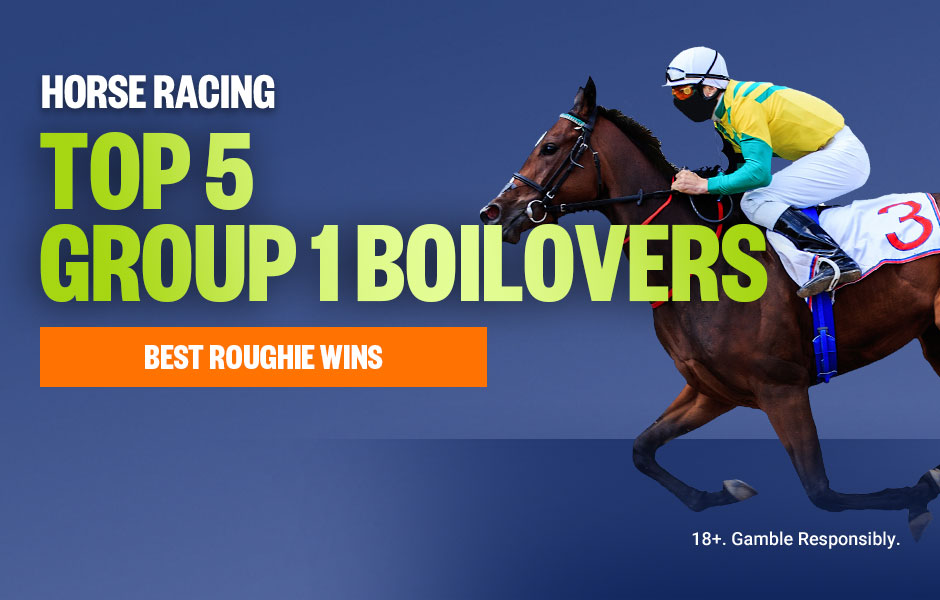 To celebrate the launch of the NEW Palmerbet Bookie Bag‘s Price Push product, Justin Devine takes a look back at some of the biggest Group 1 racing boilovers in recent memory. Punters would have loved to pump more value into these winners with Price Push.

5. Gatting upsets the stars in the Makybe Diva Stakes

A quality field including Mystic Journey, Hartnell and Humidor lined up in the 2019 Makybe Diva Stakes. Tasmanian visitor Mystic Journey had been a star of the Autumn, winning the Australian Guineas and the inaugural running of the $5 Million All-Star Mile. She was expected to win as an even-money favourite. Perth galloper Gatting was a $101 chance coming off a last placing in the Listed Idyllic Prince Stakes at Belmont.

Jockey Jamie Kah had recently moved to Melbourne after winning the Adelaide premiership and was aboard Gatting for the first time. She rode the 6yo gelding perfectly, sitting just behind the leading pair before producing him for his run in the straight. Mystic Journey followed him everyone in the run and couldn’t get past him in the run home. Favourite punters were shattered. Those who backed Gatting headed to the bar to celebrate!

4. Tears I Cry leaves them speechless

The win of Tears I Cry in the 2007 Emirates Stakes is made even more memorable by the reaction of his owner when he crossed the line. On the quick back up after running fourth on Cup day, trainer Ciaron Maher thought Tears I Cry could run well with a lightweight and hopefully fill a placing. The favourite in the race was the boom 3yo Weekend Hussler who had taken everything before him. Under the riding of Nikita Beriman, Tears I cry came with a well-timed run in the straight to hold on by half a length at odds of $101. The look of disbelief on the face of his owner Anne McGrath as he crossed the line is one of the most iconic spring racing images in recent times.

It would be Beriman’s only Group 1 win. It was a rough result for punters with two more outsiders filling the placings and the trifecta paying over $60k.

Weekend Hussler went on to win seven of his next eight including five Group 1s. Tears I Cry didn’t win another race for over two years.  Not that it mattered to Anne McGrath!

3. Gytrash grabs his chance in the Lightning Stakes

The 2020 Group 1 Black Caviar Lightning Stakes was little more than a glorified tack gallop for star sprinter Nature Strip. Nature Strip had been dubbed the “Best Sprinter in the World” after a dominant spring and was $1.4 to win first-up down the Flemington straight in a small field of seven. It was that simple.

South Australian sprinter Gytrash had been racing consistently but had not been expected to be up to Group 1 Weight For Age class. On the day, Nature Strip was at his enigmatic best, running well below expectations down the outside rail and could only finish 4th. Gytrash made the most of his opportunity, stalking the veteran Redzel on the inside before finding the line strongly to win at $21.

Gytrash showed that this was no fluke with three Group 1 placings over the next two months. Nature Strip rewarded those who stuck with him. He dominated at his next two runs including an easy win in the Group 1 TJ Smith at Randwick.

Coming off a fourth placing in a Kembla Grange maiden, little was expected of Lasqueti Spirit in the 2016 VRC Oaks. Her trainer Lee Curtis knew that she was fit and told hoop Brenton Avdulla to take her forward and sit on the speed. The filly settled perfectly and found a big lead down the back. Avdulla hadn’t thought about winning the race until he realised how far in front he was halfway down the home straight. The chasers were too far back. He rode her out. They had stolen the Group 1 at $101 in broad daylight. It was a brave ride that was worthy of the now-famous bowing celebration at the winning post.

Lasqueti Spirit would never win another race. It didn’t matter. This was a memorable spring racing moment that will never be forgotten.

1. Prince of Penzance proves that fairytales do come true in Cup

By 2015, the race that stops the nation, the Melbourne Cup had become a truly international event. The Japanese stayer Fame Game was a well-supported favourite at $5, with a number of UK stayers in the market. Prince of Penzance had done all his racing in Victoria and was showing some promise as a state. In the lead up to the Cup, he had put in in a career-best effort to win the Group 2 Moonee Valley Cup over 2500m. He was dour rather than brilliant. As a $101 chance, he was given little chance of competing against the overseas raiders. Somebody forgot to tell its rider Michelle Payne! She gave the gelding a perfect ride and he found plenty in the straight. Max Dynamite finished strongly for second for flamboyant jockey Frankie Dettori.

Michelle Payne was the first female jockey to ride the Melbourne Cup winner. They made a movie about her. And Frankie Dettori? He’s still trying!